Sorcerous Stabber Orphen (魔術士オーフェン, Majutsushi Ōfen) is a new anime adaptation of the original series to commemorate its 25th anniversary. The new series premiered on January 7, 2020.

A sorcerer who was once the top student of the famous Tower of Fang, now spends his time chasing around his hopeless clients as a moneylender, at least until his client comes up with a plan to make money: marriage fraud.

Unwillingly being dragged into the plan, Orphen encounters a monster who has long been his goal since the day he left the Tower of Fang. Between those who seek to kill the monster and Orphen, giving everything to protect the monster, his lousy but peaceful days end.

Trying to turn back his sister, Azalie, back to her true form leads to many more mysteries and the key to the secret to the world.

As part of its 25th anniversary project, a new anime adaptation of Yoshinobu Akita's Sorcerous Stabber Orphen light novel series was green-lit in 2018.

Shotaro Morikubo will reprise his role as Orphen, while the rest of the characters will be voiced by new cast members.

The second season will be known as Sorcerous Stabber Orphen -Battle of Kimluck-. 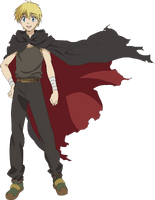 Retrieved from "https://orphen.fandom.com/wiki/Sorcerous_Stabber_Orphen_(2020_Anime)?oldid=5106"
Community content is available under CC-BY-SA unless otherwise noted.