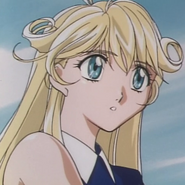 Cleao is a teenage girl with fair skin, long blonde hair and pale blue eyes. She has disheveled bangs with two signature twirls of hair on each side of her head.

Cleao has several different attires. In the 1998 anime series, she wore a long blue dress and brown shoes. In the remake anime, she is fire seen wearing an orange dress.

Retrieved from "https://orphen.fandom.com/wiki/Cleao_Everlasting?oldid=5042"
Community content is available under CC-BY-SA unless otherwise noted.